From coaching the stars to coaching you:

How Kym Johnson is changing the fitness game

You may know her as the talented, and insanely fit, dancer on Dancing with the Stars, or as a judge on Dancing with the Stars Australia, but what you may not know is that Kym Johnson is your new best friend to help you get into shape! She recently came out with her 5678 fitness program which includes exercise videos and a book that are designed to help keep you on track throughout your fitness journey.

I was able to speak with Kym about the program, what inspired her to create it, and even got some really great advice from the DWTS winner!

Kym’s inspiration for 5678 started when she began judging DWTS Australia, which meant she was no longer dancing eight hours a day and burning thousands of calories. As a result, she could no longer have the occasional hamburger without feeling the effects of it the next day. She knew she had to make a diet change, which was not going to be fun. In addition to a less active lifestyle, she was also constantly getting asked by people everywhere how they could get a great body like the celebs have at the end of the show. From all of her experience as a choreographer, she felt confident that she could create a program that everyone could enjoy and make a part of their daily routine.

That’s where 5678 comes in; where 5 stands for 5 protein sources, 6 is for the colors of the rainbow, 7 represents 7 anti-inflammatory foods, and 8 is for 8 glasses of water. This idea is based on the program that Kym worked on for herself with a nutritionist after she started judging DWTS. Having the numbers makes it an easy way to incorporate a healthier attitude into your lifestyle! The book that details 5678 has everything you need to get you inspired and started; from a menu guide to a recipe book and even stories about her time working with all of the celebrities on DWTS. Some of whom even collaborated with Kym on the book, including Florence Henderson who added a few of her own recipes. On top of other celebs contributing, she also has friends who are young moms in the book, adding their favorite recipes and giving advice for staying active during their busy days. Kym’s favorite part of the book are the gluten free pancake recipes, like the peaches and cream one, which she’ll often have for dessert. She’s also a huge fan of the tea recipes, especially the Sweet Comfort Tea which has cocoa and cinnamon- a great anti-inflammatory ingredient!

Then, there’s the 5678 DVD that is dance based and designed for anyone from a beginner to a total pro to get a good workout. The best part about the workout program is that it’s essentially interval training, meaning you go from high intensity cardio dance moves, like a jive, to moves that target your arms or legs. This means that you also get as much of a workout as you want, so if you want something low impact, all you have to do is slow down your jive! But don’t be surprised if you keep up with her pace as the workout itself will always keep you wanting to do more as you continue to learn new steps and start feeling just like the celebs on the show. Not to mention Kym’s super supportive attitude that makes you feel like you can conquer the world…or at least the dance floor! 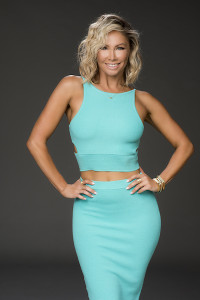 And if you’re having trouble getting motivated, take some advice from Kym: if you’re really unmotivated, just tell yourself you’re only going to workout 15 minutes. You’ll often find that 15 minutes turns into you doing the entire workout once you’ve gotten started. This is a tactic she often used with the celebrities she trained. She would tell them that they’re just doing the first half of the routine, but found that once they did that, they would end up following through with the rest of it. Like she said, the hardest part of any workout, or anything in life for that matter, is just getting it started. But, once you do, you’ll always be happy with the end result.

This is obviously something she’s carried with her throughout her life. She started dancing at just 3 years old and ended up on DWTS Australia before she came to the US version to dance with Jerry Springer in her first US season. Although she was expecting George Clooney as her dance partner, she ended up getting some good advice from him: no matter what you’re doing in life, even if it’s just sweeping floors, just do a great job and you’ll get noticed and it’ll lead to something better. Kym has remembered this advice and it’s helped her when she’s working with a new partner each season. She notes that her partners really rely on her and have to trust her since they are put in an entirely new, and uncomfortable, situation of professional dancing. She becomes a quasi life coach to each of her dance partners, and hopes that that sort of coaching can shine through in her book and inspire readers to work hard to achieve their goals-fitness or otherwise.

And for anyone with kids looking to get into this industry, be prepared for a lot of hard work and a lot of rejection. But Kym believes that you have to have a sense of humor about it, and not let rejection get you down. You just have to remember that as long as you put in the hard work and have passion for what you do, the rest of it will fall into place! This is true not just for future dance stars, but for anyone working towards a goal.

So what’s next for this two-time DWTS winner? Well, she’s engaged to former dance partner and Shark Tank panelist Robert Herjavec and is busy planning their wedding. She says they’re thinking of dusting off their dancing shoes and having a big number at the reception. Fingers crossed we get a video!