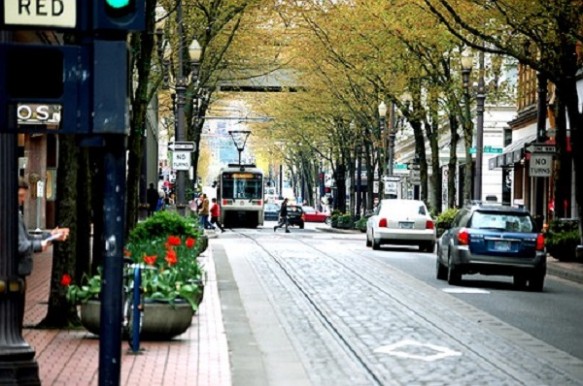 Portland, Oregon has gone through its share of changes. Much like San Francisco and the Beat Generation of the 60s and 70s, there is a notion surrounding Portland – a perception – often depicted in the extreme with shows like “Portlandia,” where tired, yearning masses of the young and restless seem find their way to the burgeoning shores of the city and live out their laissez-faire lifestyles.

Though this portrayal is admittedly exaggerated, yet comedic nonetheless, what it lacks is the fact that before the indie scene and the hipsters, before the pub crawls and wine vacations and spa packages, there was the simple love of place and dedication to heritage, to history.

There are locals like Dave J. Spacek, the Director of Sales and Marketing for the Mark Spencer Hotel, that grew up in Portland and can remember when the West End district, where the hotel is located, was little more than a district of warehouses.

But just as the warehouses have now been converted into energy efficient lofts and work spaces, so too does The Mark Spencer Hotel, located at 409 SW 11th Ave., continue to promote the progressive ideals of the city by ensuring that the city’s resources are preserved for future generations.

For example, the hotel is a Green Seal certified property and active in recycling,  even down to the corks from the evening wine reception held nightly in the hotel atrium.

The hotel is also known as the Hotel to the Arts in that it supports both well-known and fledgling theaters, including the … this support helps to ensure the continued access to culture and the arts for both Portlanders and the tourists who flock to the sights and sounds of Portland with their children, visiting such places as the celebrated Voodoo Doughnuts.

Speaking with Dave over coffee – a steaming cup of Kobo’s, a local company whose deliciously aromatic coffee is offered by the hotel at its complimentary breakfast and throughout the day as well – I agree that Voodoo Doughnuts  is indeed a great attraction and well worth the visit, and having tasted their Bacon Maple Bar doughnut (raised yeast doughnut topped with maple and bacon) the morning before, I now have an unhealthy love relationship with the famous donut shop. 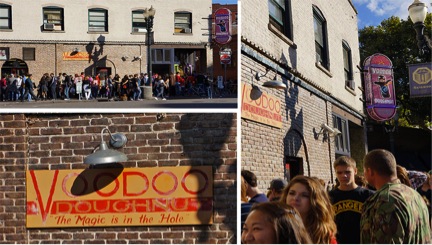 Indeed, just a few weeks ago, I noticed that a friend of mine who recently moved to Portland had posted pictures of his children enjoying the sheer sugar rush of Voodoo Doughnuts’ unique and flavorful donuts, which also include an assortment of vegan doughnuts as well. Keep in mind that Voodoo Doughnuts is CASH ONLY.

What I also learn, however, is that if I want to taste a bit of Portland like the locals, there are a few places worth trying that are off the beaten path of most tourist itineraries, such as Blue Star Donuts at 1237 SW Washington Street.

In fact, after a few more “local” tips, I have my entire day planned. Blue Star Donuts for a “lite” breakfast, where I enjoy a savory donut ring of basil, blueberry and bourbon, as well as a decadently delicious dulce de leche donut.

I then head over to Lardo’s brick and mortar establishment at 1205 SW Washington Street on the West Side (Lardo’s on the East Side is the famous food cart). At Lardo, I indulge my tastes in the Double Burger, a juicy and flavorful favorite with cascade natural beef, porkstrami, cheddar, lettuce, and the restaurant’s famous Lardo sauce. This amazing combination of flavors is accompanied by a side of Lardo fries, topped with fried herbs and parmesan. And to wash it all down, a cold and delicious local brew. 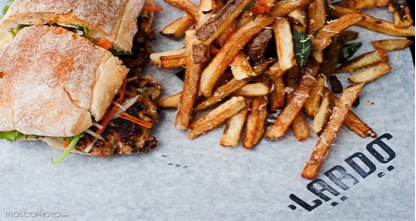 After Lardo’s sensual display of culinary can-do, I manage to make my way over to another recommendation: Ruby Jewels, the beautifully designed ice cream shop seen on the Food Network and toted by Oprah as her favorite place for ice cream sandwiches. Even with these celebrity nods to the North Portland shop’s sensual creations, the ice cream is still handmade daily in the shop’s kitchen and continues to source its ingredients from sustainable, local businesses

Ruby Jewel’s has a selection of ice cream and ice cream sandwiches that you can choose from, and if you’d like something altogether different, you can customize your sandwich by choosing both the type of cookie and the ice cream flavor. I treated myself to the gluten-free chocolate chip cookie sandwich with honey lavender ice cream, which is a perfect treat for the senses and a welcome reward for such a hot day.

A welcome treat for children is Finnegan’s Toys & Gifts, Portland’s largest toy store since 1977. The store is actually located on the corner of SW 9th Avenue and Washington Street, and can easily be added to any itinerary that already includes any of the above-mentioned places on Washington Street, such as Lardo’s or Blue Star Donuts.

Hotel guests can also feel like a local by experiencing the various amenities that The Mark Spencer Hotel offers, such as their bevy of promotions and accommodation packages.

One of the most popular packages is the Powell’s Bookworm Package. In addition to overnight accommodations, continental breakfast, wireless internet access, weekday newspaper (NY Times), afternoon tea and cookies, and an evening wine reception, the package includes a $50 gift card to Powell’s City of Books, the largest independent bookstore in the world and within walking distance from the hotel.

As the New York Times itself has noted of Powell’s Books, “the children’s section, like everything here, is phenomenally well stocked.” Powell’s Books, then, and as an extension of Portland, is such a vital asset in helping to provide educational entertainment for families that happen to be traveling with children.

Further highlighting its vast array of children’s literature, Powell’s offers activities in its stores that give children something fun and educational to do during the busy summer months with a program series known as Kids’ Storytime. Held every Wednesday and Saturday at Powell’s City of Books, the flagship store on 1005 W Burnside St., as well as other select store locations in Oregon (there are six locations in total, including one at PDX airport and another in neighboring Beaverton), the events allow children to also be a part of the Powell’s experience.

For more information on what Portland has to offer to families with children, be sure to visit Portland’s own event website, which is dedicated to planning year-round events specifically with children in mind.

In addition to the Powell’s Bookworm Package, The Mark Spencer Hotel also offers packages as unique as: the OMSI Mummies of the World Package, which includes 2 VIP tickets to the exhibit and 2 all-day Streetcar passes; the Romantic Spa Package, which includes a couple’s massage at Spa Sasse; and the Cycle Portland Package with discounts on bicycle tours and bike rentals.

Various other packages include tickets and passes to such exciting venues as the Portland Art Museum, the Artist Repertory Theatre, Portland Center Stage Theatre and the Portland Baroque Orchestra.

All of the hotel’s packages are so compelling in that they add an opulent dimension of culture to the various amenities that each hotel room pampers its guests with, such as flat panel TVs, private baths, Simmons Beautyrest Black Diamond bed sets, Wi-Fi, and fully-equipped kitchenettes.

The Mark Spencer Hotel also plans to accentuate its identity as the premier Hotel to the Arts by designing each of its six floors with a specific art theme in mind, such as photography, writing/literature, drama, and sculpture. The floors, with their individual attention to the visual and performing arts will, in their entirety, further showcase the wonderful local talent and abundance of cultural offerings that both The Mark Spencer Hotel and the city of Portland have to offer each and every guest.

With such attention to detail and with a strong sense of place both in the art community as well as in the Portland community, it’s easy to see why The Mark Spencer Hotel is truly redefining the way kid-friendly travel is perceived.