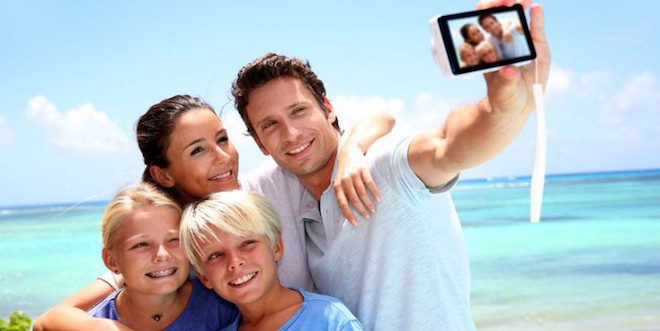 Families in the South wanting to feel far far away, but not drive for that long, should head over to Myrtle Beach, South Carolina for some Southern summer fun. Miles of pristine coastline located right in the heart of South Carolina’s “Grand Strand,” Myrtle Beach is home to a mere 30,000 people but draws a rumored 13 million in tourists annually.

One of the toughest choices on the beach is to decide between hitting the pool and enjoying all the resort hotels have to offer, or getting out onto the beach and getting some sand in your toes before heading into town for great food and waterside fun.

While the attractions are appealing, most people make it to Myrtle Beach for the water. The beaches are white and the water turquoise. Most resorts off their own private little stretch of beach, offering umbrellas and lawn chairs to set up your own little patch of paradise. 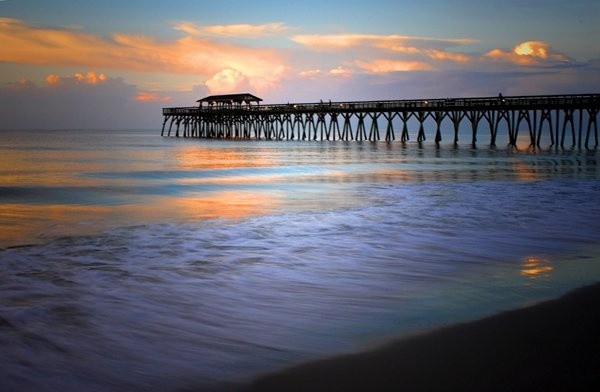 After getting out of the hotel and down to the beach for a couple of hours, avoid the hottest rays of the sun by grabbing brunch at Johnny D’s Waffles and Bakery on 33rd Avenue to get a taste of the Big Apple. Culinary Baker & Pastry Arts Chef Jamie Saunders, fell in love with food at her father’s restaurants in New York City. For a serious sugar high, try the sweet red velvet waffle, made of cake batter and topped with cream cheese icing and cinnamon sugar. Check out the menu at: Johnny D’s Waffles and Bakery

For anyone not going straight back to the water after breakfast, the areas abounds with other activities. Myrtle Beach is known for attracting its golfers.

Pirate ships, waterfalls, and sharks all await at Shipwreck Island Mini Golf. Right down the street from the shoreline and Myrtle Beach State Park, the mini golf course is a classic 18 holes, pirate-themed with a Captain or a Skipper’s course to boot! You can putt past the waterfall and feed the family of ducks that sometimes wanders nearby. For location or a looksy, visit: Shipwreck Island Mini Golf 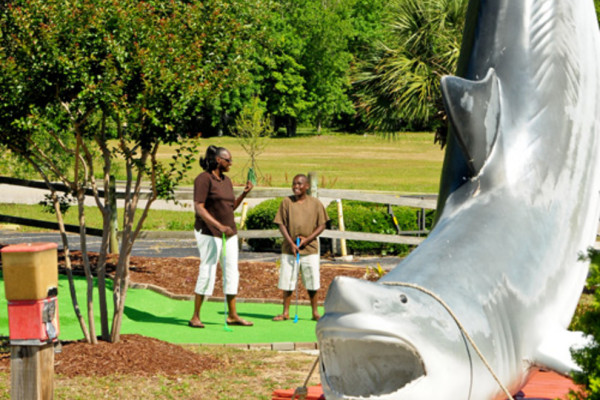 If pirate themed mini golf doesn’t completely satisfy your sea legs, head on over to Pirate’s Vogage Dinner & Show, one of the most popular attractions in Myrtle Beach. Join Captain Blackbeard and Calico Jack as they lead their crews into an epic battle for lost treasure. Pirates sing and dance amongst a full sized pirate ship set in a 15 feet deep indoor lagoon! Cheer your crew on while enjoying a fabulous four course feast! Ahoy Matey! Don’t be a scallywag, get your tickets here: Pirate’s Voyage Dinner & Show 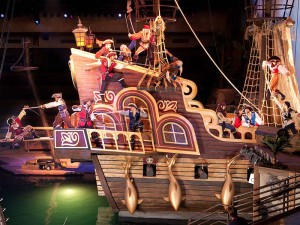 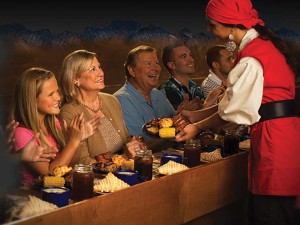 Dad can get serious about his game on putting greens with expansive views of the Atlantic Ocean and waving palms. Websites like Myrtle Beach Golf off the options of different greens based on location, course amenities, and current specials.

Ocean views, campgrounds, and boardwalks abound at Myrtle Beach State Park. Removed from the high rises of the shoreline, the state park offers a more serene look at the coastal waterways. Cozy beneath the pines, there are more than three hundred campsites to choose from. 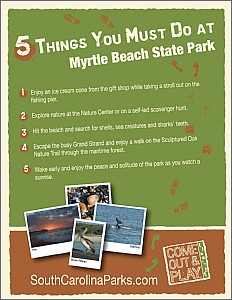 Back in town and looking for lunch or a snack, look no further than some chips and 7 layer skillet dip over at Gordo’s Tacos & Tequila. The brain-child of Bondfire Restaurant Group president, Larry “Gordo” Bond, the recipes at Gordo’s draw from Bond’s friendship with natives of Monterrey, Mexico. Sample some tasty Carne Asada tacos, and wash them down with some light Berry Ginger Margaritas. Mom and Dad can unwind from the day’s adventures without unloading their bank accounts with daily happy hour specials like $2 Carne con Queso with homemade tortilla chips or $4 Mexican draft beers. 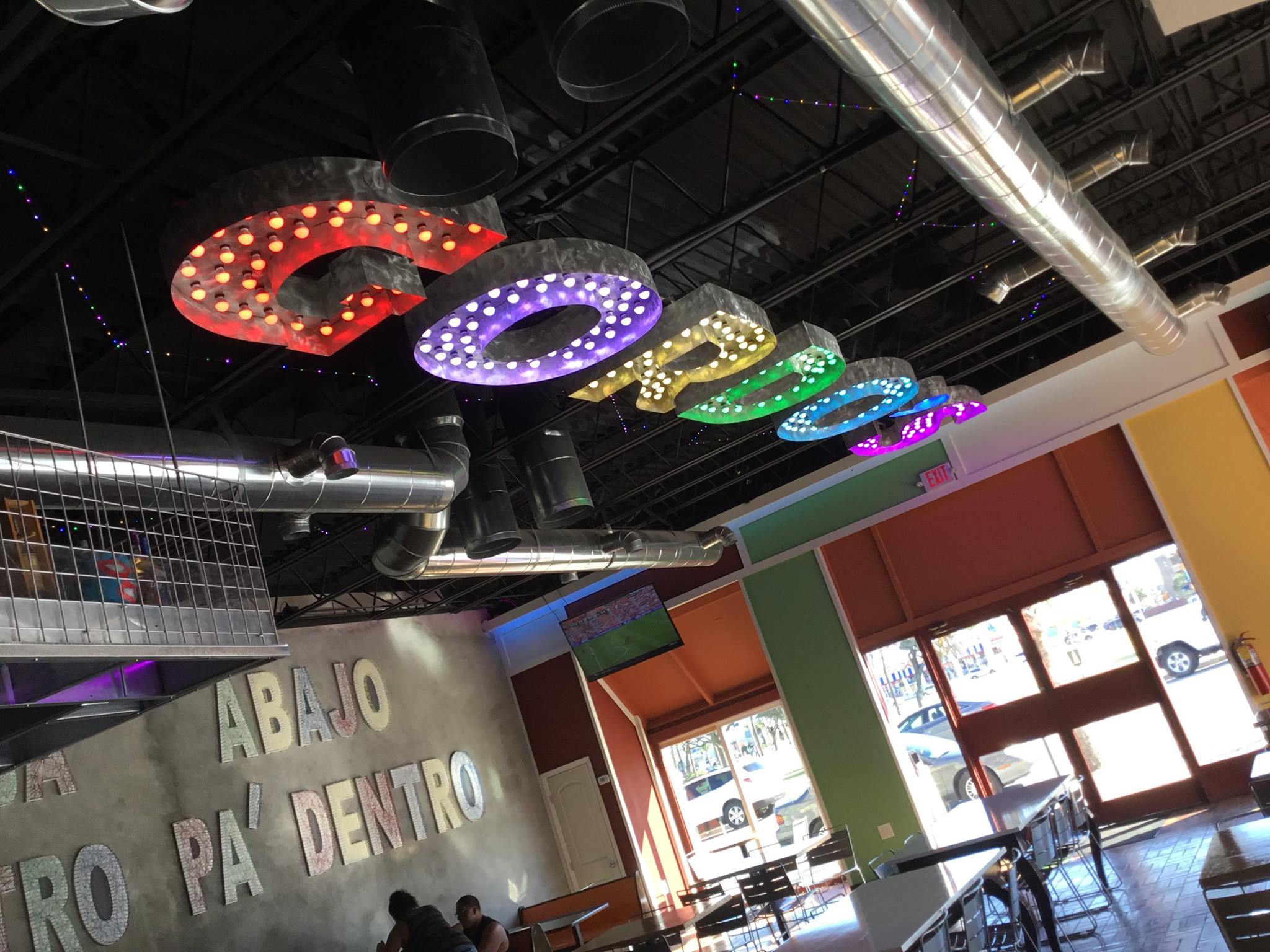 Between fishing, swimming, hiking, and soaking up the sun beachside, be sure to find some time to head indoors for some star-studded attractions.

Introduce the kids to some of the most timeless musical hits at the Carolina Opry. The latest show, Time Warp, presents the hits of the 60s, 70s, and 80s. Opening his theater in the 1980s, Calvin Gilmore was the only one producing show on Myrtle Beach for seven years. Twenty-eight seasons later, the art of the Opry wows audiences with hits from Whitney Houston, Led Zeppelin, and Motown’s great Temptations. It’s a great excuse to get out of the heat and turn up the music. 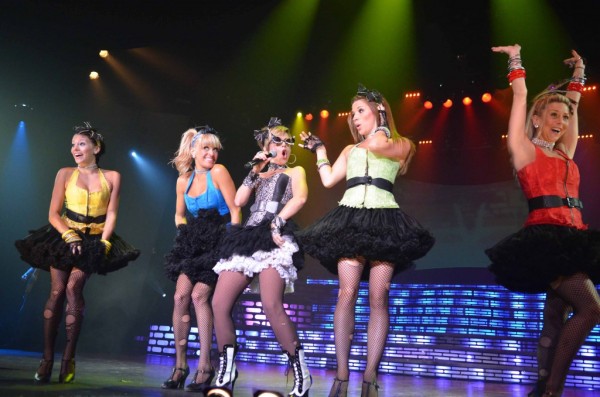 Next, head to the Hollywood Wax Museum and introduce your kids to the likes of the cast of Men in Black or the infamous Jack Sparrow/ Johnny Depp.Opened in the 1960s, the wax museum boasts one of the longest running displays in the U.S. Come face-to-face with Brad Pitt or Julia Roberts as you tour the two-story museum full of figures crafted by the talented Hollywood Wax Museum artists. Also be sure to check out Outbreak, a thrill seeking attraction where you find yourself in the midst of a zombie apocalypse and Hannah’s Maze of Mirrors where you’ll maneuver through mirrored corridors on a mission to Princess Hannah. To plan the specifics of your visit, check out their website: Hollywood Wax Museum

Dinner abounds with adventure options. Choose between the classic rock experience that is Hard Rock Cafe or the music of swords clashing at the Medieval Times Dinner and Tournament. This Hard Rock—housed in a pyramid with the lore of Egyptian god Ra and memorabilia of rock legends adorning the walls—offers a mouthwatering fare of massive Hickory Barbeque Bacon cheeseburgers, The Texan hickory smoked pulled pork sandwich and Cowboy Rib Eyes. While the menu is comparable to Hard Rock cafes across the globe, the unique interior mixing rock memorabilia, sphinxes, sarcophagi and the occasional breakout of a song and dance by the staff make this Hard Rock café a well-sought destination. You won’t want to miss a visit here! 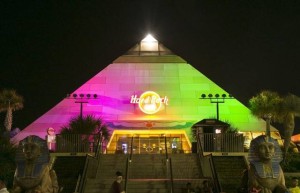 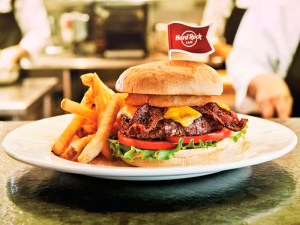 The dinner at Medieval Times is more about the show than the food, with the screech of falconry, the clash of swordplay, and the crash of jousting distracting the crowd from every bite. Watch knights duel as their majestic steeds prance about the show. Lasting around two hours, the show features highly trained horses mounted by knights competing in a jousting tournament. The meal stays true to the 11th century, with no cutlery for guests to consume their roasted chicken, spare ribs, and a variety of steaming, savory sides. Wait breathlessly to see which knight will win the competition and the hand of the princess before dinner ends. 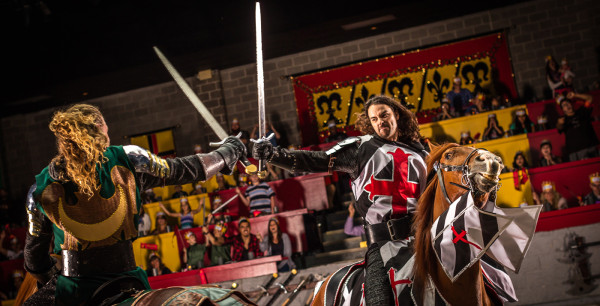 A quick drive north through the greenery of Huntington Beach State park brings guests to some of the freshest seafood and best waterfront views around. Nestled on the scenic Marsh Walk of Murrells Inlet, the Wicked Tuna is a fine dining experience that offers live events and practically live seafood. Boasting an approach of “Hook to Plate”, the restaurant sends out its fishing fleet weekly into the Atlantic to catch a variety of fish from sea bass to snapper. With raving online reviews, guests can’t help but mention menu items such as the Surf and Turf filet and lobster— lobster prepared in a Szechuan sauce alongside a juicy 8 oz. prime filet, or the full sushi bar with fresh sashimi, maki rolls or specialty Wicked Tuna roll. Outside, the Tuna Shak Tiki Bar invites guests to take in the “best view in town” while rocking out to local artists, playing live every night. To check the menu or live events, visit:  The Wicked Tuna 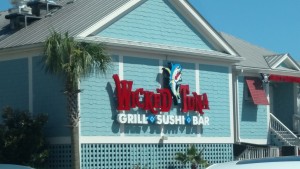 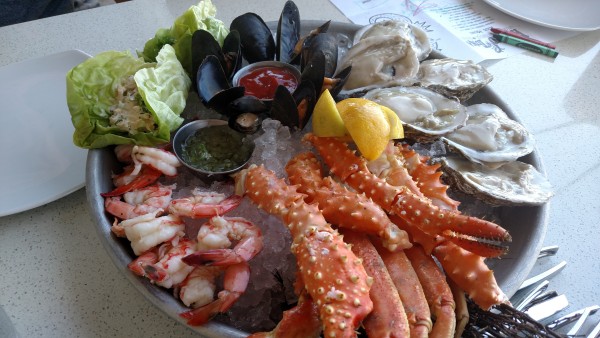 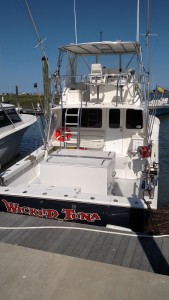 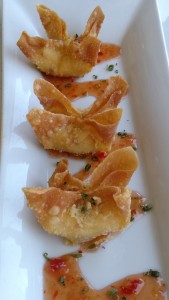 The shoreline doesn’t sleep as the sun sets and the live music continues. Beachside bars and resorts offer evening entertainment backed by the sound of the rolling Atlantic Ocean. From a star-studded walk around the Hollywood Wax Museum to the menu south-of-the-border at Gordo’s, guests to Myrtle Beach can spend their evening watching the sunset and marveling at just how far they didn’t have to go to ‘get away.’