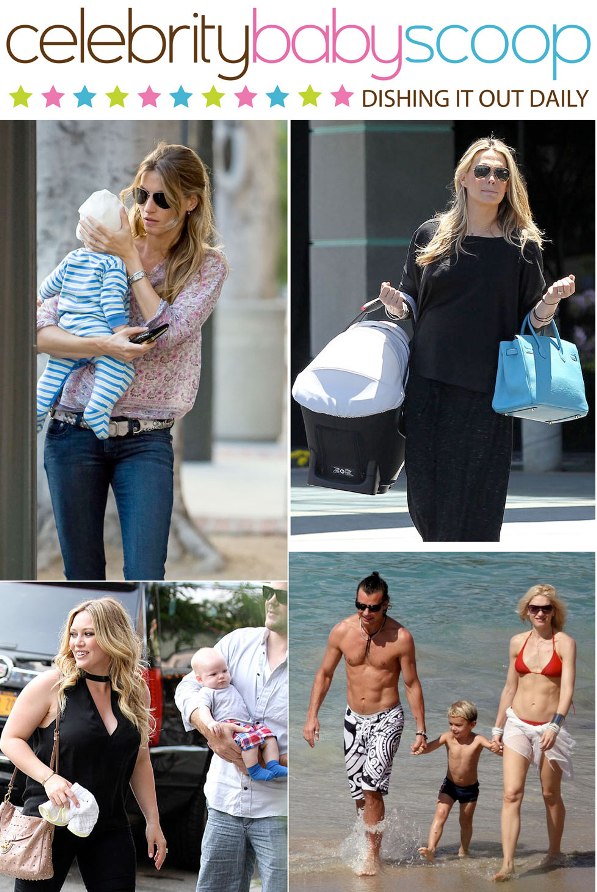 Losing the baby weight is challenging for most women. But when you’re celebrity mom, Hollywood’s beauty standards can make the postpartum period downright miserable.

Let’s take a look at 5 high-profile mamas who have opened up about weight loss post-pregnancy. Read about Gisele Bündchen‘s “muscle memory,” to Hilary Duff not losing the baby weight “overnight,” to Gwen Stefani admitting it was “no miracle” that she’s regained her svelte figure.

Since welcoming baby Keeva, Alyson has talked about not losing the baby weight quickly enough for Tinseltown.

“I think by Hollywood standards I’m supposed to be in bikini shape now that my baby is 4 weeks old,” she playfully tweeted. “My workout goal: Food drops in lap, not on belly.”

Despite her woes, fans of the How I Met Your Mother star showed their support for “setting a good example” and not rushing to lose the baby weight.

Alyson replied, “I still haven’t lost all the weight from my first daughter. Oh well.”

“My whole life you know I worked out and exercised and been in the public eye and always watched what I ate. This was like a vacation,” Hilary said of enjoying eating during pregnancy. “I had a blast. I wouldn’t go back and change it. I had a lot of fun.”

The new mom has also opened up about her postpartum weight loss.

“I’m not perfect, but I feel fantastic,” she said. “This is how it goes for most women – the weight doesn’t fall off overnight.”

The actress-singer, 24, added that she’s been exercising “a few” times a week, mixing spin classes with private training sessions.

She added that her hubby “doesn’t care” about her extra pregnancy weight, and added, “Even during my pregnancy he thought I was beautiful.”

The Brazilian beauty talked about regaining her figure almost instantly after Benjamin’s birth.

“I think it’s muscle memory,” Gisele said. “I did kung fu up until two weeks before Benjamin was born, and yoga three days a week. I think a lot of people get pregnant and decide they can turn into garbage disposals. I was mindful about what I ate, and I gained only 30 pounds.”

Actress Molly Sims and husband Scott Stuber welcomed their first child, son Brooks Alan, on June 19. The new mom recently opened up about her mission to lose the 50 pounds of baby weight that she gained during her first pregnancy.

“Eating during my pregnancy was easy, but losing the baby weight—that’s going to be a whole other story,” Molly wrote on MollySims.com. “As much as I tried to stick to a healthy diet and exercise routine while I was pregnant, I ended up gaining 50 pounds—so let’s just say I have my work cut out for me! But no matter what it takes, being in the best shape possible has always been very important to me. I’m more than willing to put in the work to get my pre-baby body back.”

“That’s been really hard,” she said of losing the weight. “But it’s almost gone. I’ve just been eating healthy,” she said, adding, “I cheat every day at least once.”

The uber-svelte No Doubt frontwoman has admitted to struggling with her weight and body image after having two children. She said that her current figure is “no miracle” and that it took eight months to lose the baby weight after the arrival of Zuma.

And even Gavin chimed in about the pressures on his wife to lose the baby weight under the limelight.

“Yeah, she does [feel under pressure to lose the weight fast], Gavin said. “I mean, she’s just so dedicated and she’s just amazing with that stuff (weight loss). It’s very hard because everyone’s so judged the whole time.”

Kendra Wilkinson On Playboy Past, Motherhood, Baby No. 2

Mario Bello:  “I Have To Have A Sense Of Humor About Trying To Juggle It All”

A Look At 10 Hollywood Adoptions

Celebrity Baby Scoop is one of the most popular blogs on the topic and the foremost provider of everything celebrity-baby, featuring baby fashion, baby names, baby trends and up-to-the-minute celebrity baby gossip and pics. Get all the latest news, updates, and photos about Hollywood’s most beloved celebrity moms, dads and their babies. Who’s the latest Tinseltown baby? Who’s due next and who just announced a pregnancy? It’s all on Celebrity Baby Scoop.