During World Alzheimer’s Month, Take Steps to Care for Your Most Vital Organ

As a fitness expert and neurosurgeon, Dr. Brett Osborn says he appreciates the growing public interest in general health and fitness. Now, he says, that attention needs to extend to arguably our most essential organ – the brain.

“There are several, multi-billion dollar industries out there dedicated to burning fat and building muscle; cognitive health, on the other hand, has been largely overlooked,” says Osborn, author of “Get Serious, A Neurosurgeon’s Guide to Optimal Health and Fitness,” www.drbrettosborn.com. 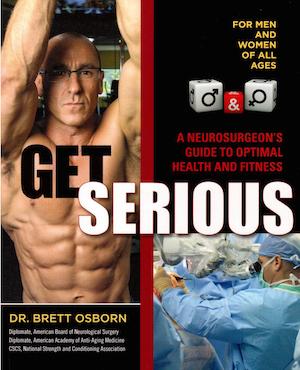 “Of course, any good health expert is quick to remind readers that it’s all connected. For example, what’s good for the heart will be, directly or indirectly, good for the brain.”

September’s an appropriate time to talk brain health: its World Alzheimer’s Month, and it’s the beginning of football season. By now, we know that football players in the NFL, college and even high school suffer considerable head trauma, whether through big hits resulting in concussions or moderate, repeated blows, he says.

It’s also soccer season in other parts of the world. Concern continues to mount about the neurological damage done to players from repeated headers, where the ball is hit by the head. The long-term effects, including depression and other mental-health problems, are similar to those suffered by American football players, he says.

“Sports can impart great habits to kids, including discipline, fellowship and an emphasis on strength and endurance,” says Osborn, a bodybuilder and father. “As our children return to school and sports, health-care providers, coaches and parents need to make it a top priority to protect our student-athletes’ brains.”

•  Learn new skills. “Just as with other health concerns, brain health should be rooted in the prevention of disease,” he says. Alzheimer’s is a neurodegenerative disease, the causes of which, and the cure, are unknown. However, it’s widely thought that brain stimulation and activity can delay the onset of the disease. The acquisition of a new skill – whether it’s learning to play an instrument or taking up waterskiing – exercises the brain “muscle.”

•  Commit to actual exercise. Everyone knows that exercise helps protect the heart, but not everyone knows that physical activity is also good for the brain. The brain is not a muscle, but it can be worked as muscle is worked during exercise, which forges new neuron pathways.

“Let’s face it, there is a component of learning in exercise,” Osborn says. “You cannot master the squat overnight; the brain has to change. Neuronal connections, or ‘synapses,’ are formed through very complex biophysical mechanisms. That takes time.”

•  Don’t sweat stress. There is such a thing as good stress, including the acute bodily stress involved in strength training. Of course, there’s the bad stress, such as psychological stress associated with work or interpersonal relationships, and environmental stress, derived from pesticide-laden food – toxins. As always, you have a choice. You don’t have to accept mental stress in your life. Reconsider toxic relationships. Rethink how you handle pressure at work. Perhaps adopt a lunchtime exercise routine.

•  Fuel a better body and brain. “I don’t believe in ‘diets,’ ” Osborn says. “Fit individuals were around for eons before the term existed, and I associate the term with temporary and, often, self-destructive behaviors.”

Again, it’s all connected. A healthy balance of food and activity will inevitably be good for the entire body: the heart, skeleton, muscles, brain, etc. Proper nutrition is a natural mood enhancer, and good health will inevitably improve self-esteem.

•  Feed your head with smart drugs. Some pharmaceuticals may help enhance cerebral blood flow and increase concentration, including Hydergine, Deprenyl and Prozac, to name a few. Ask your doctor about these. There are also over-the-counter smart drugs to consider. Piracetam is one of the oldest and has been shown to have a variety of positive effects in patients with cognitive disorders like dementia and epilepsy. Vinpocetine has potent anti-inflammatory effects, and inflammation is a key component in the pathogenesis of Alzheimer’s disease, and others. You may also want to check out gingko biloba and pregnenolone.