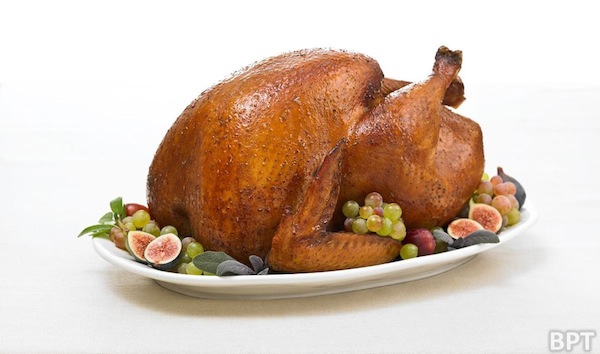 Practice makes perfect: a dress rehearsal for your turkey

The holidays are approaching and before you know it, you’ll be thinking about that daunting task of cooking a turkey. This holiday season, make sure your bird impresses all the guests and relatives by conducting a dress rehearsal for your turkey. More than 88 percent of Americans eat turkey on Thanksgiving, according to a National Turkey Federation survey. But before doing so, why not do a dry run and prepare a turkey, or try a smaller bird like chicken, using a brining technique that is sure to be a crowd pleaser?

It’s the hot new culinary trend that’s got everyone from celebrity chefs to home cooks buzzing. But even though brining may be the latest technique to sweep kitchens, it’s hardly new. Mankind has been brining since ancient times. It probably started out, hundreds of millennia ago, as a way of preserving seafood with sea salt. The technique has come a long way since, and now food lovers everywhere, in typical what’s-old-is-new-again fashion, are rediscovering the benefits of brining.

Think you don’t have the tools to brine? Chef Helen Roberts, director of culinary development at Kikkoman, has perfected the turkey brine. The brine is simple: salt, sugar, water, dried spices and the magic ingredient: soy sauce. Pull out your refrigerator drawer or a large, deep bucket to brine your bird. After you’ve stirred your ingredients and placed your turkey in the liquid, let the brine work its magic overnight.

What’s the secret behind brining? Brining has a tenderizing and moisturizing effect. The brine is absorbed and diffused throughout the meat as it soaks overnight. In addition, Roberts explains that soy sauce has a savory effect that seals in the turkey flavor and moisture. “Brining makes a big difference when you’re roasting meat. You’ll have the juiciest bird you’ve ever tasted,” says Roberts. But, as we all know, a turkey isn’t the only thing on the kitchen table – check out some recipes here that will leave your taste buds craving for more.

Ingredients (Recipe for a 16 to 24 pound turkey)

The night before roasting, remove giblets and turkey neck; rinse turkey inside and out. In a large stock pot or 5 gallon bucket, mix water with remaining ingredients. Stir well until all the salt is dissolved. Place turkey in the pot, cover with a lid and refrigerate overnight or at least 8 hours. Remove turkey from the brine, rinsing well. Follow your regular cooking instructions.

Brining isn’t just for meat though. Brine veggies for a rich, savory taste. Perhaps one of the trendiest veggies, Brussels sprouts, are a prime candidate for a soy sauce brine. Sick of the same old side dishes? Now that you’ve brined your turkey, get creative with your side dishes too. Put a spin on classic mashed potatoes with the Wasabi Mashed Potatoes recipe found on www.kikkomanusa.com. The spice and heat will balance out the creamy texture of the mashed potatoes. If you have leftover turkey, try a completely new dish instead of just reheating. Keep enjoying your juicy turkey by adding to a stir fry, include in a salad or in a tetrazzini. For leftover mashed potatoes, use panko to transform into crunchy, warm Panko Mashed Potato Cakes.

Have you ever wondered … why turkey for Thanksgiving? Turkeys became a Thanksgiving staple after the Native Americans introduced turkey to the Pilgrims back in 1621 during the first Thanksgiving meal. As you prepare to celebrate the holidays, try this brining recipe to keep turkey juicy and moist, and you are bound to enjoy a wonderful meal with friends and family.