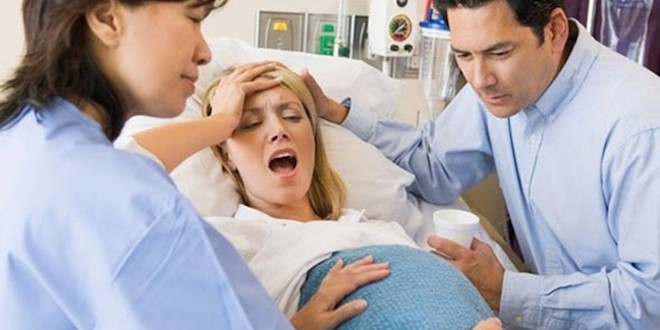 Just Breath and Curse: A Survivor’s Recount of Natural Childbirth

Giving birth is terrifying. It’s messy, uncomfortable and any shred of dignity you had left when you waddled into labor and delivery is gone as more strangers have seen your vagina and poked at your cervix than you care to divulge. As though any of that weren’t enough, it HURTS. Not like an “ouch I stubbed my toe” kind of hurt. This is an “I am going to have to push a watermelon out of my body” kind of hurt. In the end the pain is worth it of course as without the mess there wouldn’t be a beautiful baby to coo over.

With humans being a species that generally favors comfort; it is only natural that with the advances in medicine and pain management in the last century for implementations to have been made to ease the pain of childbirth. Ladies, meet the epidural.

Half of all expectant and laboring mothers elect to receive an epidural to ease the pain of childbirth, as long as they meet the appropriate criteria. The use of an epidural is generally considered a safe option for pain relief associated with childbirth and offers minimal side effects to the laboring mother and baby.

Epidural… is awesome. With my first pregnancy I went in with the full intention of NOT receiving this drug. However, labor began before my little man was actually ready and when my progress halted I was advised that it would be best to receive the epidural to allow my body to continue progressing. Reluctantly and with a tinge of regret, I accepted the pain reliever at the insistence of my midwife. Aside from a few shivers and random back pains at the injection site for the next year, receiving the epidural made delivery of my baby boy comfortable and relatively painless.

Enter pregnancy number two. This time, I was torn. I felt like I had a score to settle from having to get the drug the first time around when I hadn’t intended too, but the epidural made labor and delivery so comfortable. Despite knowing how much easier delivery was after receiving the epidural, I opted not to receive it assuming the same or similar situation didn’t present itself again.

As anyone will tell you, no two births are the same; not even for the same person. Childbirth for me the first time around was long and uneasy. Contractions hadn’t started until after I was already at the hospital and didn’t have the chance to get too painful before I received the epidural. Second time around… nothing similar at all.

Labor started fast and hard. My contractions had barely begun and there was already barely a minute between them. The 15 minute drive to the hospital felt like it took hours. The pain was only getting worse; so bad that it made me physically ill. By the time I made it to the hospital, I felt like I was being ripped apart from the inside and was positive that I WANTED the epidural. I needed relief… and I am sure that the nurses, doctors, and other laboring mothers wanted me to get some relief too so I would stop screaming profanities every 30 seconds.

Then, that unavoidable loss of dignity came through. It was then that I was given devastating news. I was nine centimeters dilated, completely effaced, and my water had either broken without my knowledge or it had been leaking without me knowing.

There was no time for an epidural. I was going to have to deliver with NO pain relief.

When the time came to push however (roughly 37 seconds later), I wasn’t scared anymore. Despite being told to stop screaming by a doctor I had never seen before as my midwife was sick and her backup didn’t make it to the hospital in time, I was (at least in my mind) as cool and collected as anyone can be when they are about to push a human being out of their body.

I don’t even recall the actual delivery hurting that bad. Perhaps my brain took over and told my pain receptors to take a break; perhaps my memory of labor is

warped as a primitive survival mechanism. What I can say for sure is that after only a few big pushes, I delivered a healthy, beautiful, BIG baby boy.

Would I willingly do it again without an epidural? Absolutely.