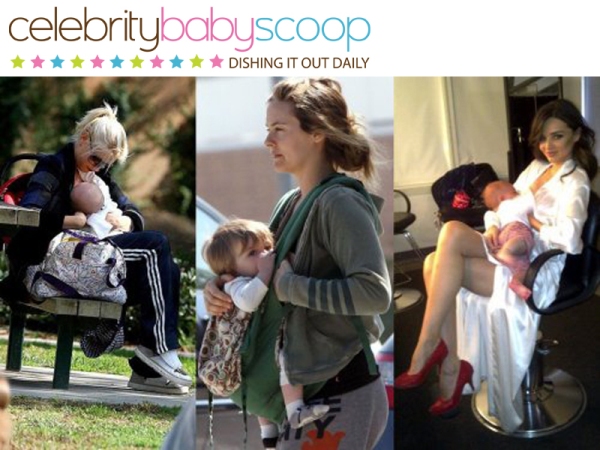 10 Celebrity Moms On The Joys Of Breastfeeding

The latest cover of TIME showcasing 26-year-old mom-of-two Jamie Lynne Grumet breastfeeding her 3-year-old son with the title Are You Mom Enough? recently had the internet abuzz with strong reactions.

Whether they nursed for weeks, months, or years, let’s take a look at 10 celebrity moms who loved breastfeeding.

From Gisele Bündchen‘s call for a “worldwide law” of mandatory breastfeeding, to Gwen Stefani‘s tears over her self-weaning babe, to Alicia Silverstone‘s “insane feelings of ecstasy while baby nurses,” read on about Hollywood mamas who love breastfeeding their babies.

“Jamie Lynne Grumet breastfeeding her 3 yr old on Time Magazine’s cover is causing a fuss. @brochman says extended breastfeeding is more common than we think,” the mom to son Draco, said. “Not sure what else to say other than I’m 20 months into it and going strong…!”

The Lizze McGuire alum, 24, also talked to Celebrity Baby Scoop about working toward her breastfeeding goals.

“Yes, it’s like a lot of things you take on in life,” she said. “You have to experience it to understand. No one can do it for you.”

Anger Management actress Selma Blair, 39, recently talked about breastfeeding her son Arthur, stating his nourishment is her first priority, regardless of who she offends.

“We all have nipples. I don’t care who I offend; my baby wants to eat,” Selma said. “If I can’t get a cover over me quick enough, so be it.”

She added that she’s easting well while providing breast milk for her baby.

“Nourishing myself correctly is very new to me, so I’m learning as well. It was important for me to be a real mom who loves her kid and needs to have more energy for herself and is trying to learn how to do this.”

Gisele Bündchen made headlines with a controversial statement about making breastfeeding mandatory for all new moms. “I think there should be a worldwide law, in my opinion, that mothers should breastfeed their babies for six months,” the model mom said in an interview with Harper’s Bazaar.

In a follow-up statement written on her blog, Gisele clarified her thoughts about breastfeeding and the impact caused by her comment.

“My intention in making a comment about the importance of breastfeeding has nothing to do with the law,” she wrote. “It comes from my passion and beliefs about children. Becoming a new mom has brought a lot of questions, I feel like I am in a constant search for answers on what might be the best for my child. It’s unfortunate that in an interview sometimes things can seem so black and white. I am sure if I would just be sitting talking about my experiences with other mothers, we would just be sharing opinions. I understand that everyone has their own experience and opinions and I am not here to judge. I believe that bringing a life into this world is the single most important thing a person can undertake and it can also be the most challenging. I think as mothers we are all just trying our best.”

Eco-friendly mama Alicia Silverstone welcomed her first child, son Bear Blu, with husband Christopher Jarecki last May. Over the past year, the new mom has written about nourishing her son on her blog The Kind Life. The Clueless star admitted breastfeeding can be painful at first, but the outcome can result in “insane feelings of ecstasy.”

“It can be [painful], but just at first,” Alicia wrote. “What I’ve been told is it’s important to have the bonding latch right away. Everyone I know who had pain in the beginning says how amazing it was after the first two weeks – that the insane feelings of ecstasy while baby nurses are the best ever, and that it’s so worth the baracuda jaws for two weeks. Also, I have seen and heard so much about how the baby, when first put on the chest immediately after birth, will crawl up to your nipple after a while and open its mouth like a little bird looking for the nipple. How cute and precious is that?”

Victoria’s Secret model Miranda Kerr, 28, and husband Orlando Bloom are parents to son Flynn, 16 months. “He’s the best thing that ever happened to me,” the new mom gushed of her beautiful baby.

The model mom has become an outspoken advocate for breastfeeding since welcoming her first child.

“I intend to breastfeed for as long as I can,” she said. “My breast milk will give our little Flynn the nutrition he needs for his continued healthy development and to all mums out there I am sure you will make the right choice for you and your baby.”

Rockstar mama Gwen Stefani was seen breastfeeding her yongest son, then 3-month-old Zuma, on a park bench in Los Angeles, Calif. A few months later, the mom-of-two talked about how Zuma self-weaned during No Doubt’s reunion tour.

“I didn’t want him to [quit],” Gwen said. “It felt like a total rejection. It was really hormonal, and trying to stop in the middle of tour was insane.”

On a goodwill trip to Sierra Leone in 2009, Salma Hayek famously breastfed a week-old infant whose mother was too malnourished to produce milk herself. The actress recalled the wet nurse experience.

“The baby was perfectly healthy, but the mother didn’t have milk,” Salma said. “He was very hungry. I was weaning Valentina [then 2-years-old], but I still had a lot of milk that I was pumping, so I breast-fed the baby,” she said, her voice dropping. “You should have seen his eyes. When he felt the nourishment, he immediately stopped crying.”

Salma says she was hoping to raise awareness that Sierra Leone has the highest infant mortality rate in the world. She went on to say, “I actually think my baby would be very proud to share her milk. And when she grows up I’m going to make sure she continues to be a generous, caring person.”

Years later, Salma continues to answer questions about acting as a wet nurse.

Whether it’s breastfeeding or eating organic or using eco-friendly cleaning products, Jenna Elfman makes every effort to give her sons Story, 4 1/2, and Easton, 2, a healthy start in life. The mom-of-two recently opened up about societal barriers to breastfeeding.

“There are familial barriers and institutional barriers [to breastfeeding],” Jenna said. “In my prenatal classes, breastfeeding was talked about for five minutes. It was like, Hold your boob like this, and I didn’t even know what she was talking about. And these were private lessons. My mom didn’t breast-feed me. My generation was all formula-fed mothers. The first time I saw someone breast-feed I was 11 or 12. And I was like, Whoa. I thought it was awesome, and I wanted to do that. It felt so right to me.”

Mom-to-be Molly Sims is getting “excited” to welcome her first child – a boy – in June. The Las Vegas star recently opened up to Celebrity Baby Scoop about her hopes to breastfeed and nourish her baby with “liquid gold.”

“Yes, I’m hoping [to breastfeed]! I hope, hope, hope so much because it’s ‘liquid gold’ and it’s such a great bonding experience,” Molly said. “I’m really hoping that my milk comes in. The benefits are just so amazing and I think it’s the best thing you can do if you can do it. If you can’t, I don’t want to get upset about it. But I really want to breastfeed so badly.

Celebrity Baby Scoop is one of the most popular blogs on the topic and the foremost provider of everything celebrity-baby, featuring baby fashion, baby names, baby trends and up-to-the-minute celebrity baby gossipand pics. Get all the latest news, updates, and photos about Hollywood’s most beloved celebrity moms, dads and their babies. Who’s the latest Tinseltown baby? Who’s due next and who just announced a pregnancy? It’s all on Celebrity Baby Scoop.

Other Top Stories from CelebrityBabyScoop:

Best Celeb Pics of the Week