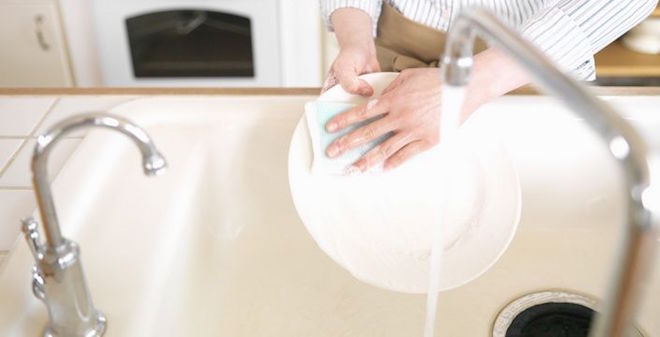 The Link between Hand Dishwashing and Fewer Allergies for Kids

The exponential rise in chronic allergy conditions in children around the globe has sparked an abundance of research in recent decades as doctors and scientists alike are dedicated to finding possible causes – and even cures.

Like in this recent study conducted at the University of Gothenburg in Sweden, where roughly 1,000 Swedish children between the ages of 7 and 8 were surveyed regarding their daily habits at home, including dishwashing. Sure it sounds strange, but the results were quite telling.

Of the children surveyed, doctors found that those whose parents said they were mostly washing the family’s dishes by hand rather than using a dishwashing machine were significantly less likely to have developed eczema and somewhat less likely to develop asthma symptoms and hay fever. And by significantly, they mean half.

These findings, published online in the February edition of the medical journal Pediatrics, support the growing scientific hypothesis that suggests that families in affluent, developed countries are raising children in much too sterile environments, caused in part by increased use of hand sanitizers, laundry and dish detergents and less time spent around animals.  This is what’s commonly known as the “hygiene hypothesis” – a popular theory suggesting that early exposure to many different microbes may keep the immune system working properly, especially in young children.

“Factors related to the low allergy risk seen in many environments, such as in developing countries, crowded living conditions, early day care attendance, having siblings, and farm living, are all supposed to be mediated via microbial immune stimulation in early life,” the study suggests.

“It may also be assumed that hand dishwashing and buying food directly from farms are both associated with an increased microbial exposure compared with modern machine dishwashing and industrial processed food, respectively.”

The researchers also found that along with exposing children to farm fresh foods rather than processed, children who had a healthy diet (at least once a month) consisting of fermented foods or vegetables – such as sauerkraut or fermented cucumber –tended to be less likely to have developed any allergic disease of any kind overall, thanks to its plethora of beneficial probiotic bacteria.

While some of this is nothing new to most parents, it is still a reminder that raising your child in a spotless bubble will only wreak havoc on their immunity later in life. Does this mean you need to throw out your dishwasher? Probably not. But what these scientists are saying is that parents should raise their children to spend more time outdoors, more time around animals and more time getting their hands dirty.  And the kitchen sink is a good place to start!