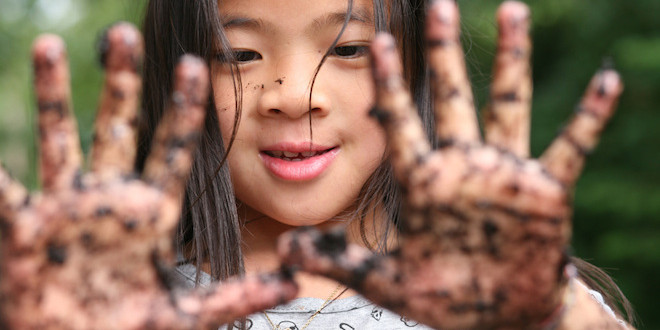 Why it is important to let kids stay messy

When my first child was born I was adamant on cleanliness. I don’t mean bath every day and making sure I wiped every crevice each diaper change clean, I mean baby wipe attached to my hand shooting out like Spiderman constantly wiping away every single speck of dirt kind of clean.

I created a monster. A squeaky clean wipe obsessed monster; one who ironically hates baths… but that is another story entirely.

The second time around, I find myself with a baby boy who, although he hates baths more than his big brother, doesn’t object to a little filth. I have even caught him eating dirt on more than one occasion. He doesn’t like that either, but he keeps going back to it. And if there is a bug in it? Game over, he is happy as can be. Don’t worry though; I stop him from eating the bugs.

As my boys are growing older I have noticed several differences between the two. Of course they aren’t going to be carbon copies of each other or of myself and husband, but I can’t help but think that perhaps my obsessive cleanliness in one against the other and their differences in personality are a direct result of my actions. They are silly, imaginative and energetic, but the oldest is more structured; Borderline obsessively structured. The youngest is much more carefree and extremely welcoming to danger (He even has the scars to prove it).  In addition to their differences in personality, the youngest has been consistently healthier in his life (knock on wood) with only having to go to the doctor for physical injuries opposed to the health issues of his brother.

It appears there may even be some science behind my thinking that the over-cleaning of my oldest and lax approach with youngest could have lead to their differences; their health differences at least.

It has been said that allowing children (and adults if you are feeling dangerous) to play in dirt, eat it and resist succumbing to the growing trend of constant hand-sanitizing can aid in building stronger immune systems, amongst other things. Could it be that turning my head to the little bit of dirt on the cheek of my youngest aided in his nonexistent health issues? Could I have aided in preventing the four day stay in the PICU of my oldest if I hadn’t stopped him from eating that fruit loop off the ground? Maybe, maybe not.

What I do know for sure, is life is much simpler without fretting over keeping my boys spotless every second of every day. They are messy (or at least as messy as they will allow), they are happy, and they are healthy as they can be. So go ahead, let the kids make a mud pie. In fact, join them! Maybe a little mud bath will allow you to use more sick days for impromptu trips to the beach instead of at the doctor’s office.